Mukesh Ambani Might be Planning his Own Cryptocurrency, Jio Coin

Mukesh Ambani Might Be Planning His Own Cryptocurrency, Jio Coin:-

The next idea of Reliance Jio to go ahead and make a big difference might be I the world of cryptocurrency. A leading media channel has reported that it might create its own cryptocurrency with the title ‘Jio coin’. This move might have been a result of a massive increase in the value of Bitcoin over the last few weeks,  where the whopping value of around 1700 dollars was reached by Bitcoin. 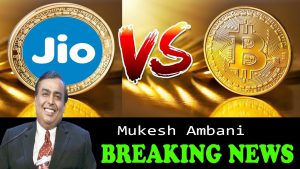 This sort of increase in the values of some cryptocurrencies have created many millionaires and Mukesh Ambani ‘s Reliance group is seemingly venturing into this space too.

Young man Akash Ambani is chosen as the person to mine the cryptocurrency (elder son of Mukesh Ambani) with a supporting team of 50 professionals who will be working under him. These professionals will build a blockchain and will also create the stock of cryptocurrency. After the blockchain technology will be developed, they will be put to use for supplying chain logistics and so on.

It is hoped by the Reliance Jio team that the work will be used to get into the IoT(Internet of things) arena. A lot of force has been gained by this technology with devices like home speakers, smart=watches, etc. It is predicted that security to the data can be added by blockchain technology exchanged through the Internet of  Things devices.

The Indian government has not yet officially put a legal mark on Bitcoin’s exchange and despite this, the trading of cryptocurrency in India is going with full force. We hope that a positive decision from the government regarding cryptocurrency trading will arrive soon.

« « Previous Article
How to trade on Koinex? How to get started on Koinex?
Next Article » »
Kentucky Fried Chicken (KFC) Canada Launches ‘Bitcoin Bucket’

Contribute with us:- It is very exciting (and helpful) contributing to another website & there are all sorts of benefits too. We are happy to ... END_OF_DOCUMENT_TOKEN_TO_BE_REPLACED