In the past few days, Bitcoiners have encountered that the media is spreading rumors about cryptocurrency’s ban in South Korea. This has seen some panic selling undoubtedly. But there is no reason to worry because here is a good reason to cheer your mood. Colonel Sanders is now serving fried chicken with the crypto aura. KFC Canada has taken a decision to go ahead and serve Bitcoin for the finger-licking’ chicken. 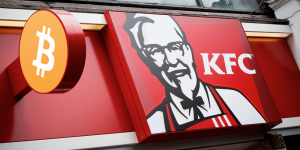 Last Friday, Kentucky Fried Chicken Canada has tweeted that ‘customers now can pay for a bucket of the Colonel’s Original Recipe in Bitcoin.’’

It is named as ‘’Bitcoin Bucket’’, they have priced the chicken at 20 Canadian dollars ($16), and this is comprised of 10 original recipe tenders, waffle fries, a medium side, two chips, and gravy.

‘’Welcome to 2018, Canada’’ was posted on the Canadian’s outlet. This definitely bears testament to Bitcoin’s popularity quotient in present times. Is it not?  The Facebook live feed has also been set up by the company which shows the number of Bitcoins that will be needed to pay for the meal. The video was played for four continuous hours.

« « Previous Article
Mukesh Ambani Might be Planning his Own Cryptocurrency, Jio Coin
Next Article » »
Cryptocurrency Regulation: Are Bitcoin, Ethereum and Ripple legal in India?

Contribute with us:- It is very exciting (and helpful) contributing to another website & there are all sorts of benefits too. We are happy to ... END_OF_DOCUMENT_TOKEN_TO_BE_REPLACED