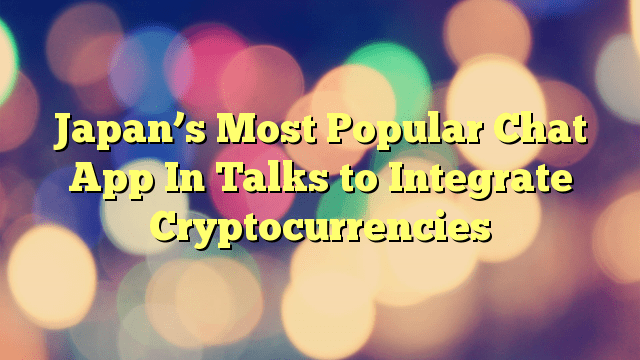 Japan’s Most Popular Chat App In Talks To Integrate Cryptocurrencies

One of the most popular apps of Japan, which boasts of having 168 million active users in each month, could also go ahead and integrate cryptocurrencies. We are talking none other than ‘Line’ app of Japan. Reportedly, this company is involved in a conversation with a number of companies to get cryptocurrencies integrated into its mobile payment service (Line Pay). People who are familiar with this matter have reported that that the Tokyo-based company ‘’is in discussion with multiple companies on using cryptocurrencies for payment services including Line Pay. Line Pay is the mobile payment service that is used in the app ‘Line’. It has reportedly signed deals with 30 banks across Japan in order to allow immediate transactions using this platform. Line Pay has reached a myriad number of users, nearly 30 million in Japan. ‘Line’ app was launched in 2014.

The market value of this app is 1.2 trillion yen.

Contribute with us:- It is very exciting (and helpful) contributing to another website & there are all sorts of benefits too. We are happy to ... END_OF_DOCUMENT_TOKEN_TO_BE_REPLACED